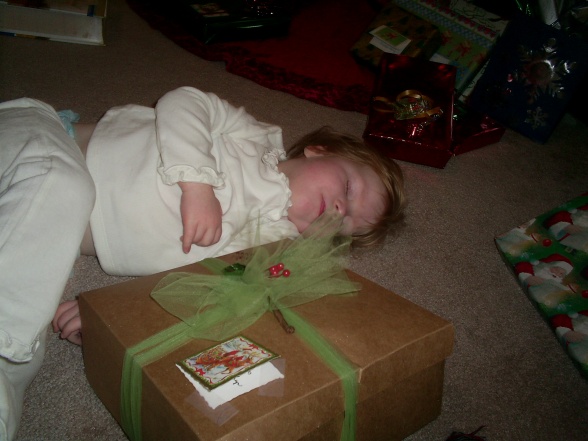 People are asking very legitimate questions about suffering during these days after the Newtown shootings. Below is part of our family’s Christmas newsletter in 2005, the year we got Gwendolyn’s diagnosis and watched her suffer through seizures almost every day.

Christmas is a time of contrasts. So many people generously give to others in need. But there seems to be so much need. Families put up lights and decorations while darkness clouds their relationships. We shop and spend and wrap gifts and cook and party to the point of fatigue, and then we complain that there isn’t enough time or money to enjoy these days. We mumble, “Happy Holidays” and wonder why we have lost the spirit of the season.

Some might say that Christmas is escapism. For a short time we try to forget about the troubles in the world. Tsunamis, wars, and hurricanes have challenged our compassion and understanding. Can there really be a God who cares and who can do anything about it?

We have wrestled with this question even more personally this year [in 2005]. Can we trust God when Gwendolyn’s seizures don’t seem to stop? If He can heal her, why doesn’t He?

God is not silent about suffering. One of oldest books in the Old Testament, Job, is a story about suffering. Job was a righteous man. God blessed him with many children and possessions. But one day, that all changed. His livestock was stolen. His servants were killed. And even his children died in a storm. Then he lost his health, suffering painful boils all over his body.

How did Job respond? He did not curse God; he did not sin. He kept trusting God. Job’s friends were convinced that Job (or his children) had sinned and deserved God’s punishment. They debated with Job and begged him to repent. Job fought back and asked God for a fair hearing. Surely God would correct this injustice.

Finally, God appeared. “Instruct me,” He asked. “Tell me where you were when I laid the foundations of the world? Where were you when I created the stars?” Job finally understood. His circumstances were not determined solely by his behavior. God had a larger plan. And He didn’t explain it all to Job.

We don’t always get what we deserve. And thank God for that! Usually we deserve much worse than we get. Why do we struggle so much when adversity comes? Because pain hurts, and we don’t like it. But the truth is that God has never left us, never forsaken us, and never stopped loving us.

Jesus didn’t initially get what He deserved either. The King of Kings was born in poverty and then cruelly executed. But His perfect life and death and subsequent resurrection made a way for us. Now, He is exalted in His rightful place. And we can have eternal Life and a home with Him forever. Jesus is the answer for suffering.

7 thoughts on “Did E’er Such Love and Sorrow Meet?”

What do you think? Cancel reply